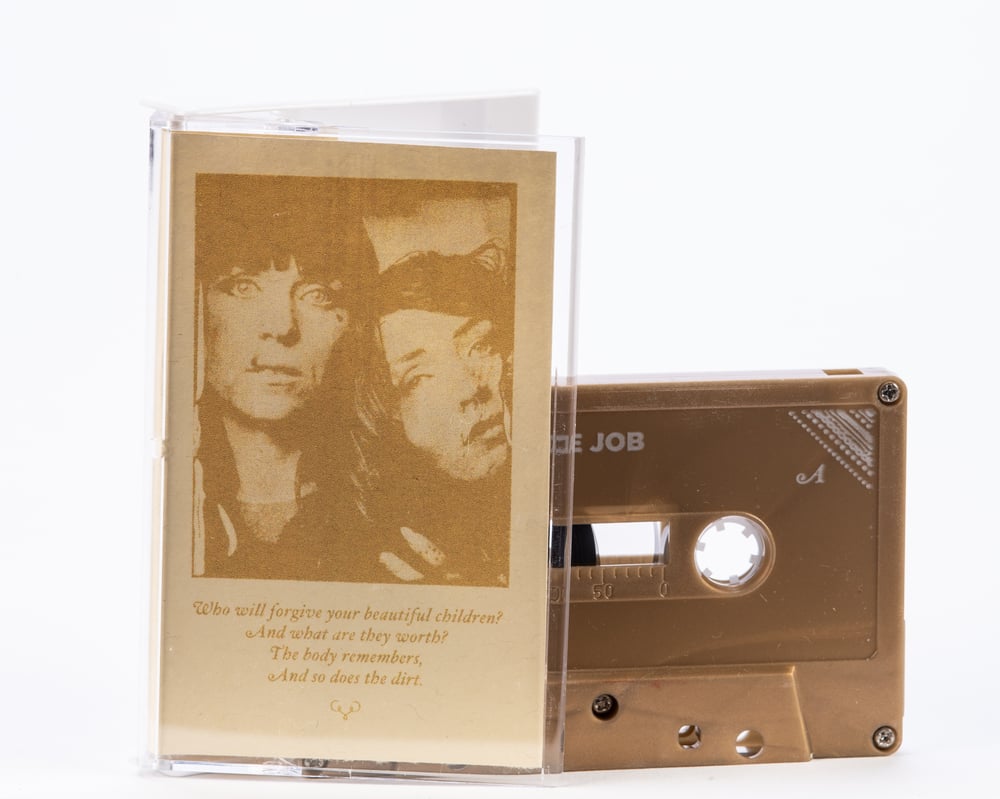 Hand Grenade Job (HGJ) is an experimental post-americana duo from Washington, DC. Both women are vocalists and multi-instrumentalists, with Beck Levy (Turboslut, The Gift) primarily playing guitar and Erin McCarley (Delta Dart, Pygmy Lush, Governess) primarily on percussion. Levy and McCarley both come from DIY punk scenes. Their previous bands were loud. HGJ explores a different mode of heaviness. As a band, they are directed by the values of minimalism, agility, and confrontation. Their live performances include elements of visual and performance art, with a constructed habitat that evolves from show to show.

HGJ's first full length, "Devotionals," was recorded in a cabin in western Maryland between two blizzards. Recorded by Kyle Gilbride of Wherever Audio (Girlpool, Radiator Hospital), the album evokes the setting in which it was created. Some songs are sparse, utilizing only vocals. Others are expansive, employing guitar, accordion, autoharp, cello, marimba, timpani, and field recordings. A haunting, ethereal undercurrent runs throughout. Negative space takes on its own formidable character. Immediately after recording, Levy took up an unconventional artist's residency at the National Institutes of Health, where for 7 months she participated in research on the psychological effects of Ketamine. "Devotionals" is an album bookended by snowstorms and psychedelics—and it sounds like one, too.

Hand Grenade Job performed new original compositions as accompaniment to a production of "An Iliad" at the Capitol Hill Arts Workshop in October. In November, HGJ performed at the Smithsonian American Art Museum as part of the Luce Unplugged Series. From October 2016 through January 2017, Levy and McCarley are performing in Ragnar Kjartansson's performance art installation "Woman in E" at the Smithsonian's Hirshhorn Museum and Sculpture Garden.

Levy and McCarley, long mutual fans of each other's bands, formed HGJ in 2012. Their sound grew out of necessity, with early practices taking place at low volume during McCarley's children's naptime. In the same basement where HGJ practices, McCarley screenprints subversive children's apparel. Levy is also a printmaker, using letterpress to self-publish art and writing. HGJ has released a self-titled cassette tape, a digital EP, and a digital single. They have toured throughout the East Coast—particularly the Mid-Atlantic region—and New Orleans. HGJ is looking forward to touring extensively in 2017.

"Beck Levy [of Hand Grenade Job] is responsible for a lot of underpinnings in the framework of modern-day DIY/underground culture happening in the USA right now."
Katie Alice Greer, The Media, January 24, 2014

"Hand Grenade Job makes me feel like I died and they died earlier and they are helping me deal with my new death."
Michael Cantor, The Goodbye Party, July 2015

"This band is more than a band – they are a living, breathing collaboration and relationship made public. They are a multi-media experience. They are a break for a weary heart and soul. They are sonic salve."
Katy Otto, Impose Magazine, June 8, 2016

"HGJ have been classified as experimental or post-punk, but pre-punk seems more accurate, or better yet, pagan—there’s a healthy dose of the occult in their sets...Most of HGJ’s songs are performed with acoustic percussion, droning guitars, or sounds that feel like they come from a blighted dollhouse. They sing together, with vocals so entwined and harmonized it forms a single, towering, overpowering wave."
Dan Fox, Antigravity Magazine, March 2013